I had contacted the Lake Elsinore Storm about coming up for the game with my friend @Thebaseballphd to talk to some of the players for our blogs.  We were given permission and told 2 media passes would be left for us.  We had heard that Zack Greinke would be there doing a rehab start before coming off the DL, which meant that a lot more members of the press would be there covering the game. 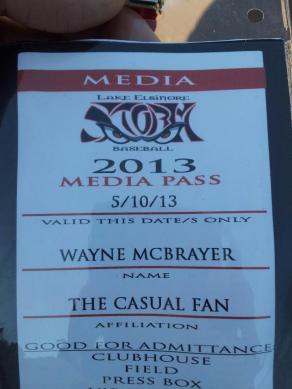 We arrived at 4:10PM and received our passes and were escourted to the press box and then down to the field.  As we were on the field taking pictures and talking to Lake Elsinore Storm players, we saw the Rancho Cucamonga Quakes players arrive and walk down to the field to stretch out before the game.  In the stand sitting next to a gentleman with a laptop open was Zack Greinke.  I decided since there was barely anyone there that I would go up to him and ask him who his favorite player was growing up.  My thought was to do the same thing that Dick Enberg did years ago when talking to Ted Williams, and that was bring up a topic no one has probably asked him about (in Dick’s case, it was talking about 2 innings that Ted had pitched against Detroit in 1940).  As I walked up to Ted, one of the Dodgers media people walked up and reminded me Zack had a social anxiety disorder.  I thanked him and walked over and waited.  The gentleman he was talking to motioned for me to talk to him, so I did.  I introduced myself and what I write about and asked him who was his favorite player growing up.  He said, “I’ll answer your question after the game assuming I talk to anybody.”  I thanked him and wished him well.

We did attend the press conference later where Greinke answered questions posed to him by the media.  I didn’t bother to ask him who his favorite player was then, I asked him how many rehab starts he thought he would need before he was ready to return.  He said, “I don’t know, I’ll talk to the organization and we’ll talk about it tomorrow.”  I recorded the entire press conference and will be taking time over the next couple of days to type it out and post it along with my thoughts that me and the @TheBaeballPHD had after the game.

Friends of The Casual Fan

The Niños of the Padres

Discussing the People, History, and Destinations of Major League Baseball

Adult Based Education of Sexual Health and Wellness

A baseball summer in San Diego

What's On My Mind / Boyce & Hart, Monkees and More

The San Diego Padres' ongoing quest for a World Series (or at least a playoff title). "You know that many runners enter a race, but only one of them wins the prize. So run to win! Athletes work hard to win a crown that cannot last, but we do it for a crown that will last forever." 1 Corinthians 9:24-25

Random Ramblings, Heated Diatribes, and Statistical Analysis about the San Diego Padres and the great Sport of Baseball

A Fictional Replay of the 1977 Season

Sports Righting
Ballparks on a Budget
The Midwest League Traveler

Traveling & writing about the Midwest League, past & present, since 2011